This book has received a lot of mixed reviews online, and I can understand why, as I have mixed feelings about it myself: 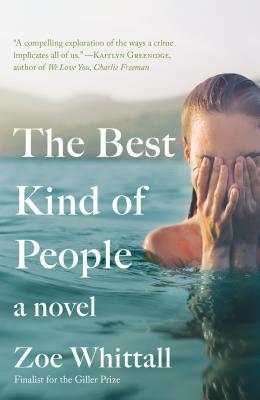 The Best Kind of People is a family drama (a genre I usually like, which is why I picked it up).  The story surrounds the Woodburys, a wealthy family living in an elite suburb of Connecticut.  The father, George, teaches at the local private prep school, where the daughter, Sophie, is a student.  Sophie has an older brother, Andrew, who is a lawyer in New York.  The mother, Joan, is an emergency room nurse.  The ancestors of this family founded the town, so they are well-known and socially prominent.  They seem to have it all, until one night …

(While this may seem spoiler-y, it happens in the first chapter, and is what the rest of the book is about) …

The police arrive to arrest the father, George, on charges of inappropriate behavior with some of the girls at the school where he teaches (and Sophie attends).  George denies everything, and no one wants to believe he is capable of such things.  For the rest of the book, we are engaged with his wife’s struggle to make sense of the situation (all signs point to his guilt), his daughter being stigmatized at school, and his son trying to sort out the legal angles of the case.

We don’t really get George’s point of view on all this.  The other family members occasionally visit him in prison while he is awaiting trial, and he maintains his innocence, but the reader doesn’t have a deep window into George’s character.  We spend the most time with the daughter, Sadie, and her boyfriend Jimmy – who have a lot of sex and smoke a lot of pot for young teenagers.  Maybe I’m a prude, but I found those plot elements overblown and a bit tiresome.

The further I got into the book, the more of a page-turner it became, primarily because I wanted to see if George would end up being guilty or not (I’ll leave that to you to discover).  But overall, I didn’t find these family members very likeable, and thought that the wife, Joan, was rather gullible at times.

I gave it 3 out of 5 stars on Goodreads.  Wasn’t great, wasn’t terrible.