Happy Monday, lovely friends!  I have some more books to show you: 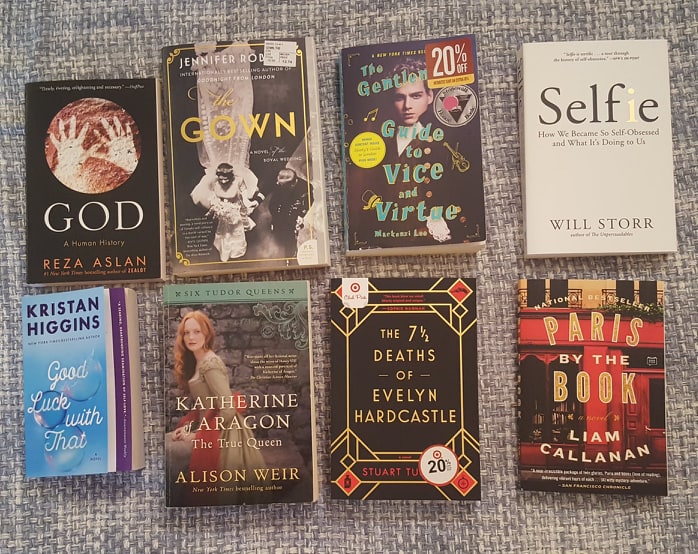 Here’s what we have:

God, A Human History by Reza Aslan.  Nonfiction book about how God has been conceptualized by humans across the ages and cultures of earth.

The Gown by Jennifer Robson.  Historical fiction based in fact.  Behind the scenes story of the creation of Queen Elizabeth’s wedding gown.

The Gentleman’s Guide to Vice and Virtue by Mackenzi Lee.  Historical fiction, supposed to be quite funny, about young aristocrats on a European tour.  LGBTQ+ themes.

Selfie by Will Storr.  Nonfiction – the subtitle tells it all:  “how we became so self-obsessed and what it’s doing to us.”  Popular culture critique.

Good Luck With That by Kristan Higgins.  A novel about three women who met as girls at a weight-loss camp, and the development of their self-images.

Katherine of Aragon: The True Queen by Alison Weir.  I must confess, I’m eager to get into this one.  Weir is writing a book about each of Henry VIII’s six wives, and I believe the first three are out.  I want to read the whole series.

The 7 1/2 Deaths of Evelyn Hardcastle by Stuart Turton.  I understand this is a “Groundhog Day” type story, where Evelyn Hardcastle keeps dying and then waking up again.  Don’t know much about it other than that, but it’s been popular on booktube.

Paris By The Book by Liam Callanan.  A novelist disappears, and leaves his wife plane tickets to Paris.  Once there, she discovers a manuscript he’s been writing.  This leads to a hunt for his whereabouts.

That’s it for now!  I have TONS more and will be showing them to you at intervals.  I went to the library book sale in early June, where books were $3 a bag, and hit the jackpot!  Plus, some of these are lent/borrowed, and some are purchased at bookstores.  As you know, I don’t do “TBR” lists – when I do a haul, those books go into a queue to be read.